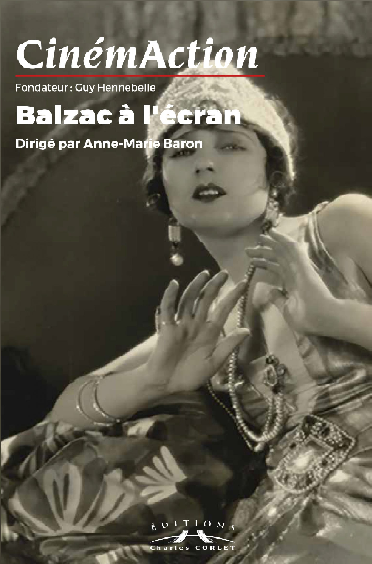 If Honoré de Balzac were to live these days, he would have a finger on the television remote control. Program manager. See director. Man of images for sure. He has the stature of these sacred monsters who, like Orson Welles, knew how to offer their physical halos as cinematographic monstrosities, Hitchcock also used them widely. Balzac is an ogre who plunges his pen into the inkwell of life. This is demonstrated by Anne-Marie Baron, the coordinator of the Balzac dossier on screen in the last issue of CinémAction. This important work is also tinged with the bitterness of a Lucien de Rubempré on the illusions that the press can offer. Balzac closes the CinémAction adventure, started in 1978 under the leadership of Guy Hennebelle and Monique Martineau, and supported by Françoise Puaux. But in the digital world who cares? Us! The reflection cannot be replaced by any verbal jousting, as if the cinema could be satisfied with a few sometimes lapidary sentences. CinémAction, as we have already written, remains in the memory of those who defend the cinema, by its freedom of tone but also the eclecticism of its choices. CinémAction has understood that the 7th Art is a whole, its collection of 173 numbers testifies to it, not to mention the numbers on television – the image is universal whatever the screen and that one cannot at any time fragment the pleasure. For this last issue, Anne-Marie Baron offers us a research work that deserves that we look into it, that we are delighted to have the book in my hands. Our gaze scans the pages for the first word. Keystone of any building. It is between the chapters. Description of a picture maybe, a sentence. That of an adaptation of the Lost Illusions. Because that is what it is all about in the various articles that make up this historic CinémAction. We are talking about illusion. Without knowing (at the time) that this number would be the last. “Balzac writes on the image”, and here comes hope. Balzac was not contemporary with cinematography and yet his texts are part of the writing of the 7th Art and this from the silent origins of cinema. So, for example Andrew Watts and his analysis of the Auberge Rouge by Jean Epstein (silent period). So many chapters that you will want to rewind in the right order by leafing through this CinémAction. Chapter 3, “from adaptation to transposition”, awakens our senses. A reflection program. Do not betray the author! Or even feel moderately guilty in front of the Splendors and miseries of courtesans. And the unspoken abstain from the freedom to write and agree to censor themselves for fear of displeasing. Where is the freedom of tone when you feel suspected of “freedom”! Balzac is there. And Anne-Marie Baron’s team is the symbiosis. Everything is to read, to feel. And we know, these days that it is important to vibrate for the words put in images. Balzac would have liked to feel like a filmmaker.