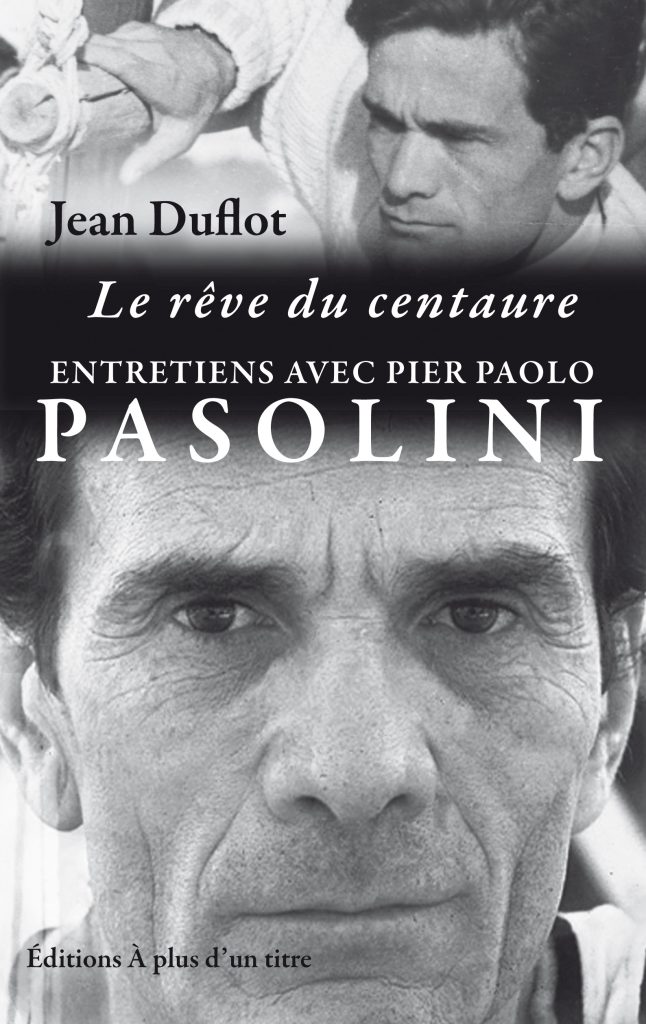 The idea is good. This reissue (2016) of Jean Duflot’s interviews with Pier Paolo Pasolini at Éditions A, in more ways than one, a Savoyard publishing house, awakens our sleeping memory. Complete book with an accomplice journey. A singularity that goes far beyond the list of Pasolini films. Perhaps because one feels in reading, this precarious balance, whole that was the life of the scenario writer. Reflection of a cinematographic world today buried in the tasteless standards of creation. Pier Paolo Pasolini became a filmmaker through poetry. Poets, don’t you wield the power of words like making a film? Screenwriter, actor, playwright, director. From the chills of the Italian ultra-left Pasolini draws his respectability, tracing his life in excess. The word is there, sometimes reluctantly. He gives himself up, offering a modern perspective to today’s gaze. Understand, that what you have in your hands is a travel guide to the future: 1970. And yes, the words of a contemporary artist, whole. The filmmaker does not share genres. Being a director for Pasolini is part of the political movement of society. You cannot dissociate art from politics. It took Jean Duflot patience and time to tactfully transcribe this journey through the “words” of cinematography. The traces are there, sinuous. Like so many pictorial touches. Unless it is, once again, a mythological journey, initiation will say others. But surely a face to face with the gods that the author of Medea is familiar with. All the force of this interview is there in the unspoken ones which are lodged between the sentences. We must therefore accept, as a reader, to be enchanted to better understand Pier Paolo Pasolini’s complex relationships with politics, and their shaping in his films. It is a whole. Twenty-three films and one murder later, Italian and European cinemas are still in want, shattered by mourning. Normality has something violent, it rots the individual. Absence is a matter of privateer, buccaneer, free man. Death is only a refuge. Filmmakers know this, as do actors whose hopping image remains eternal. Film Pasolini! Work and make your films discover the upheavals of a society that never ceases to have hiccups. Jean Duflot’s maintenance book dissects this funny modernity almost 50 years old and which is still as scary today.