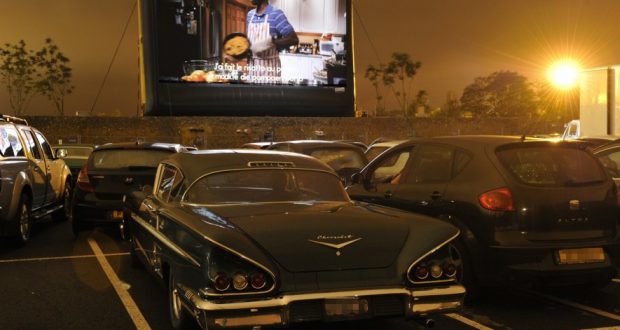 Let’s wipe out the old world. Well almost. While waiting for cinemas to open their screens again, let us rejoice in this initiative as old as the American cinematographic adventure. The Drive-in (1933 the first). We can’t leave the rooms empty! So it was enough to see American Graffiti again to start dreaming again. The “first traveling cinema drive-in festival in France” began its tour in Bordeaux. Admit that there is nostalgia in the air. Origin: The association founded by Mathieu Robinet, former general manager of Bac Films, bringing together a group of actors from the world of culture and the associative world. And there is no question of forgetting to leave the curtains with lowered curtains on the side of the road. The profits will be donated to cinemas, exhibitors and distributors in difficulty because of the Covid-19. A beautiful team faced with the unique fact, for the first time since the cinema exists, the halls were forced to close. “This is why we decided to come together to create a traveling and united festival, to help cinemas and distributors in difficulty and keep in touch with the spectators,” explained the organizers. With the social motto that “The festival aims to highlight local exhibitors and distributors who fight daily to keep the spectators alive and curious (…) In addition, aware of the environmental problem caused by the Drive -in, the association undertakes to “calculate the carbon footprint of [its] events, and to compensate it by paying a percentage to an association for the defense of the environment”. Virtuous in addition. What more could you ask for? , the number of vehicles accepted per screening: 220 and the price, from 5 € for children under 18, to 10 € for adults. The places ordered online and the sound of the film broadcast on a radio frequency. perfectly thought out, united, but not to the taste of some. The National Federation of French Cinemas (FNCF) does not seem to be on the same wavelength and asked “the extremely strict application of the rules in force ”for this type of event, tackling the“ guarantee of compliance with health conditions ”with“ a precise health protocol, identical to all of the professional branches of our country ”and cutting, in the name of hygiene, the grass underfoot at the citizen initiative of Mathieu Robinet. The FNCF added in a press release that it ““ deeply regrets the media and economic damage caused by these demonstrations which divert spectators, the media, the local and national administration from the only fight to be waged: the reopening of theaters … ) There is no reason why these initiatives should escape the general rule and put spectators and employees at risk. ”Is this not pushing the plug a little far, in this very special period? Do not forget, please, the history of cinema and its itinerancy. The popularity of the 7th Art was born on the roads, with the fairgrounds (remember the sequence of Day of Feast). In any case, it seems he, the Mathieu Robinet initiative is to bring the economy of theaters to its knees When the distance between two cars … On the contrary, the ephemeral, militant and associative concept which brings together 35 volunteers reinforces “this lack” that rooms will fill once the pandemic has passed, early July it seems, when the festival will stop. This initiative received the support of local communities, and the authorization of the prefecture and the CNC. Upcoming screenings in Marseille and in Hauts-de-France. In Caen Gautier Labrusse, (Cinéma Lux), launched its initiative in collaboration with Paul Séchaud, head of Caen Events by taking over the exhibition grounds for five sessions per week from May 26. Let it be said, initiatives of this type deserve to be highlighted.